Hi everyone, I'm a long time, too long, user and I've been apart of the Dragon Age community, mostly lurking since the first game. Introductions over, I've come to realize that it gets lonely playing in a sea of random people and I want to open myself up a little more to people. So if there is anyone out there that can tolerate me, I would love for you to add my PSN (same name as on here.) so we can go hunting together.

Forget the more part. I was just trying to be funny, failed horribly. Please feel free to delete, this was stupid. 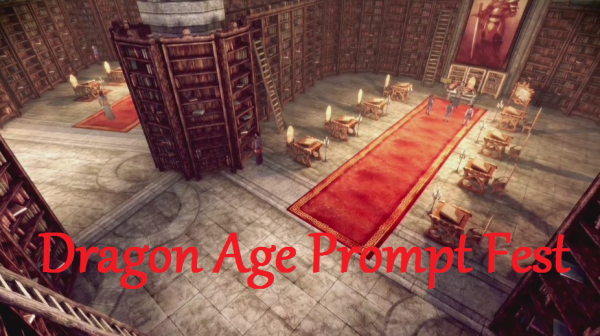 Welcome to the prompt fest! In case you're new to the comm, this is just a weekly post where you start with ten prompts, and you pick one to write a drabble on and post it in the comments. Or have an idea that isn't from a prompt? Post it anyway! (Artwork is welcome too!)

This is the official posting thread for Dragon Age: Inquisition's second DLC, "The Descent".

There is both a SPOILERS comment (to discuss the DLC) and non-spoilers thread (to discuss issues relating to DLC availability, problems, etc.) on this post. Please put all spoilers about the DLC behind an LJ-SPOILER cut. Thanks!

For PS3 and Xbox360 players:
Unfortunately, it was announced that this and all future DLC will only be released on PC, PS4, and XboxOne. :(

The "Jaws of Hakkon" DLC discussion thread can be found here.
Collapse